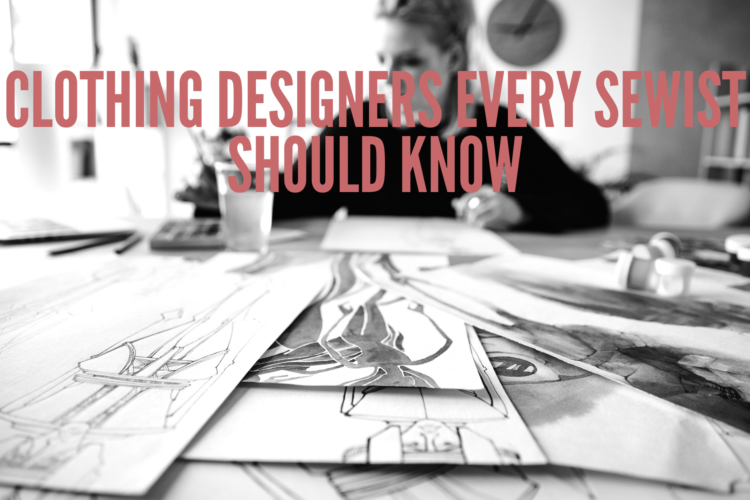 Whether you are just sewing for fun or an extra income. Every sewist should have at least some understanding of clothing design and fashion. Besides the fact that it has influenced us for generations, it can also be used as a source of inspirations for sewing.

Here are some of the most influential designers and what they are celebrated for in fashion. But first, let’s take a look at why fashion is important at all.

Why Is Fashion Design Important

Whether you like it or not every season there are clothes inspired by a trend. This is the basis of fashion itself. If it was not for these brands who have the talent to see a certain style gaining popularity and then replicating them in stores; you would not have that favourite pair of jeans or jacket.

Clothing designers are unique in their ability to design garments that people love and also design pieces that people are going to love. These individuals keep pushing the boundary and innovating new things season after season. Yes, we also do not like fast fashion and what it stands for, but that does not mean the creativity of fashion has to be bad for the environment.

This French philosopher investigated the only known ‘fashion’ text of the day available in journals. He then compiled the first linguistic code for fashion. Through this analysis he compiled the largest system for fashion of the day.

Charles was not only the first male dressmaker of his time. But he was also the first to gain a notable reputation, at the time only matched by woman dress makers like his counterpart Rose Bertin. Rose Bertin was a famous dressmaker for Marie Antoinette.

Back then designers were not renowned. Worth was also one of the first designers to make a collection pre-season. These styles stayed in circulation for at least 5 years before the next trend took over. He also established modern couture until the rise of ready-to-wear took over in the 1960s

In 1911 Paul Poiret was more than just a fashion designer. He also created the Rosine House Of Perfume. One of the first lines of perfumes. Then he also had a school of decorative arts and a fabric printing factory. As a designer, he also excelled by becoming a central figure in the artistic and creative development in Paris.

Lanvin was the founder of one of the oldest surviving couture houses. She was also one of the most successful couturiers in Paris. In her day she made clothes that celebrated traditional concepts of femininity. Of all her achievement the most noteworthy was her ability to run her business like a modern-day designer. She researched her designs in museums and art galleries for inspiration.

Also known as COCO Chanel is still idealised today for her timeless designs. In 1910 she opened her first shop in Paris selling hats and only later on moved to clothes. She became renowned by chance when she designed a dress from an old coat for a cold day in Deauville. Women saw the dress and asked her to make one for them, creating a trend.

Dior, like Chanel, was a French designer. He created a design in 1947 called “the new look”. The tiny waisted dresses became extremely popular. This was a luxury for women’s fashion after WW1 because the design aspired to free women through “radical femininity”. It was a breath of fresh air from the “utilitarian attires” of the day. And brought back the concept that woman’s wear could be extravagant rather than just functional.

Like most fathers of the time, Cardin’s father wanted him to become an architect. But Pierre had an interest in dressmaking from early childhood. In 1950 he opened a shop for men’s suits and gradually grew in popularity. In the 1960’s he launched the so-called Space Age look with goggles and helmets. And then grew more in stature for licensing his name to sunglasses and other products.

She is an Italian clothing designer and head of the Prada powerhouse. She took over the family’s luggage business in 1978 and was an unlikely entrepreneur. But her unique vision for the company turned it into a billion-dollar company. What we personally love about Prada is her seeming disregard for the rest of the fashion world. She is not afraid to take risks and spearhead new ideas.

There are many other names, but these are the ones we found the most inspirational either because of their triumphant road to success or their ability to go against the norm. Whether you just love making clothes let these amazing names inspire you.

Want to learn how to design your own clothes? See our comprehensive course here.

Related Articles
What is the difference between a sewist and a fashion designer?
What is the Bothers Embroidery Machine: Everything You Need To Know
How To Spot Fitting Issues